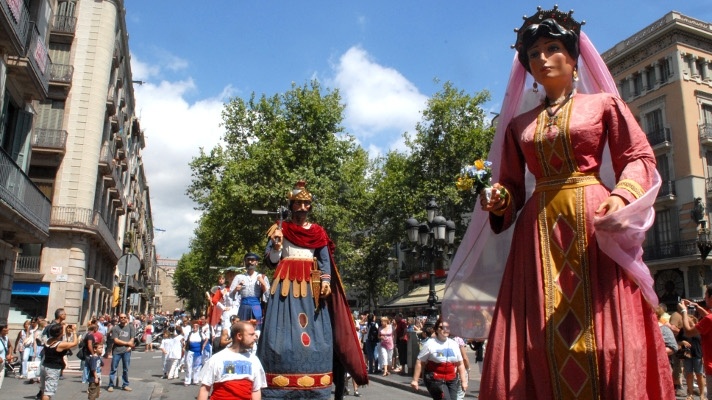 Another year here comes the Raval's Festa Major, which will be filled with activities for all tastes from July 13 to 16: parades, screenings, workshops, sports, concerts of all kinds of music, meals and popular dances in a Program where the open and diverse character of one of the most emblematic neighborhoods of the city is reflected. Here is a summary of the most outstanding.

TO START
The departure will be marked on the 13th, a parade and a performance by the choir societies of the Raval, a dance and the parade of giants, with big heads, the Bouquets and the Vaqueta del Raval, which will give way to the speech of Faouzia Chati Badou, President of the Association of Moroccan Women in Catalonia.

TRADITIONAL
In the Raval you can not miss the traditional elements of any major festival in Catalonia. We will visit the Castellera and Giants Day in the Gardunya Square (July 15th, 6:00 pm) or the Correfoc de Festa Major (July 15th, 22:00 p.m.), which begins its route at Guifré Street and will travel through the main streets of the neighborhood.

CONCERTS AND FESTIVALS
Fri. 14 – The numerous programming includes the celebration of the Pulpada Electrónica, Galician food and music from 5:00 p.m. to 2:00 p.m. On Friday, the people of Freedonia will set up their party at Reina Amàlia street crossing with Sant Pau.

Ds. 15 – Highlights the day 'Ameba Prismatica goes to Raval' that from 11:00 to 3:00 in the morning, they will ride on the gardens of Sant Pau del Camp. Also, the Youth Concert of the Festa Major of the Rambla del Raval from 7 pm, with several groups. Finally, Les Vvitch offers us an immersion in the trap universe, far from the prevailing machismo at 8:00 pm at the MACBA Chapel.

Sun 16 – Habaneras song at 9 pm on the Rambla del Raval. Banglar mela, live music, typical Bangladeshi food dancing in the Pedró square as of 5 pm. And as a main course, the XV Alternative Fiestas of El Raval We resist from 12 in the Ágora Juan Andrés Benítez (Riereta-Aurora junction).

CURIOSITY ACTIVITIES
Also worthy of note are the Haima Amical Festival which will be held during the main festival at Plaça dels Àngels with cultural workshops (from Friday to Sunday from 10 a.m. to 12 p.m.); A new edition of the Bastonera Day at the Raval (July 15th, 6pm) at Pedró Square with a parade of seven gangs in the streets of the Raval.

There will also be room for cinema. Screening of dumb movie at jazz rhythm on the 15th at 10 pm in the Martina Castells square. On Sunday 16 will be screened 'Criadas y Señoras (The Help)' in the Women: Actions and resistance series at 21.30 in Plaça dels Àngels.

There will also be space for the zarzuela, with live music. It will be on the 16th at 7 pm at the square Aureli Capmany after 7 pm. Also on Sunday there will be an exhibition of dances from various countries, the dances of the diverse Barcelona, ​​from 4.30 pm on the Rambla del Raval.

SPORTS ACTIVITIES
On the Rambla del Raval, the 5th Atlética Race of the Raval's Festa Major (July 14th, 9:00 p.m.) or the XXII Speed ​​Skating Course of the Raval (July 15th, 10:00 p.m) will take place; An activity to get to know the Raval neighborhood through a gymcana full of fun activities (July 15th, 6pm).

Festival of Music and Black Culture Say It Loud arrives to Barcelona!

changingBLACKFRIDAY: SAVE 0% AND GET 100% HAPPINESS AT HOSTAL MARE NOSTRUM

Recent Posts
Categories
Facebook
Instagram
Copyright Hostal Mare Nostrum 2020 - Designed and Developed by Milimetricmkt.com - All Rights Reserved
Back To Top
×
We use cookies to ensure that we give the best user experience on our website. If you continue using this site we will assume that you agree.OkeyPrivacy Policy