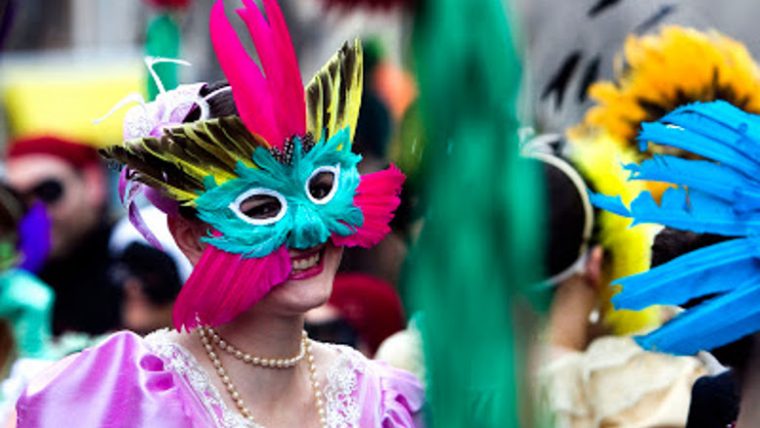 The winter version of the city’s local festival is on from 9 to 12 February, with traditional popular culture playing a major part.

On Fat Thursday (February 8th), King Carnestoltes gets the festivities for Carnival under way, where transgression is the norm and fun is obligatory.

Cheeky King Carnestoltes will be arriving in the city on 8 February this year, on Fat Thursday. His arrival signals the start of a week of revelry, where transgression, role reversal and the exaltation of individual and collective freedom is the order of the day.

Up until Ash Wednesday, the city’s districts will fill with afternoon snacks of botifarra d’ou Catalan pork and egg sausage, omelettes and suet pastry cakes, dances with masks, neighbourhood parades, children’s parties and shows, exhibitions, omelette contests and Carnestoltes at the markets.

The ceremonial burial of the sardine rounds off this festival, which has changed a lot since 1333, the first year it was documented in Barcelona, but continues to be one of the most firmly-rooted celebrations in the city and one which involves local residents.

Further information can be found here.

Once again this year, pupils in their third, fourth and fifth years of primary school get festivities under way with the children’s proclamation. This educational activity familiarises them with political institutions and public participation in Barcelona. This year’s celebrations mark the centenary of the birth of Maria Aurèlia Capmany, one of the figures behind the recovery of these festivities 35 years ago.

In the evening on Friday 9 February, the city’s eagle figure heads a procession as far as the Santa Maria del Mar temple, where the traditional ball de l’Àguila sees the figure perform a dance inside the basilica, in the chancel and in front of the altar.

Early on Sunday morning, graller players will fill the streets of the Gòtic neighbourhood with music, while at 10 am the Moixiganga de Barcelona culture group will be performing in Pl. Sant Jaume, followed by human formations by the Falcons de Barcelona group. The city’s human towers groups will also be holding a human towers gathering in the square, this year welcoming back the Castellers de Sarrià following a fourteen-year absence.

There will also be meeting bringing together 500 lace makers from all over Catalonia on Sunday, as well as musical parades and big band performances, sardana dancing and a meeting of festive mulassa figures from around the country. These mule figures can also be seen at an exhibition in the Palau de la Virreina marking the 450th anniversary of the Mulassa de Barcelona, which will be accompanied on a procession as far as Pl. Sant Jaume.

On Monday 12, the traditional Penó de Santa Eulàlia ceremony sees the banner of the city’s co-patron unfurled in the morning, while in the afternoon there’s sardana dancing in Pl. Sant Jaume. The stroll and dance by the Laies sees an extensive array of giants culminate the popular culture celebrations in traditional style.

On Saturday 17 February it will be the turn of the Lali Jove, the city’s youth association festival, which this year has the slogan ‘Fem nostra la ciutat, fem nostra la festa’ [making the city ours, making festivities ours]. Activities for young children and teenagers will be organised from 5 pm to 8 pm, with concerts afterwards.

The neighbourhood of El Raval celebrates its own particular version of carnival with the Ravalstoltada on 17 February.

Once again this year, associations and residents’ groups from the Raval neighbourhood are celebrating carnival with a parade, a procession and drumming.

Festivities get under way with a communal paella at 1 pm. At 4 pm the various groups will assemble in Pl. Folch i Torres before setting off half an hour later. The procession takes in C/ Hospital, La Rambla, C/ Nou de la Rambla, C/ Sant Oleguer, C/ Sant Pau and C/ Reina Amàlia as far as Pl. Folch i Torres. The groups will gather there, rounding off the Ravalstoltada with a drumming session.

Other activities are also in store during the festivities, such as visits, exhibitions and puppet shows at the Casa dels Entremesos, a display of children’s mini giants, the Santa Eulàlia craft fair, the open day at the City Hall, and various activities and open days at the city’s museums and cultural centres.

Check out the full programme on the website for Santa Eulàlia 2018.

Recent Posts
Categories
Facebook
Instagram
Instagram has returned invalid data.
Copyright Hostal Mare Nostrum 2020 - Designed and Developed by Milimetricmkt.com - All Rights Reserved
Back To Top
×
We use cookies to ensure that we give the best user experience on our website. If you continue using this site we will assume that you agree.OkeyPrivacy Policy